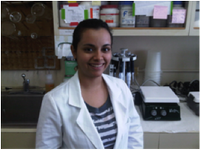 Nikol Matos performed extracellular recordings on the ventral roots of an isolated neonatal mouse spinal cord to assess the effects of caffeine on "fictive" locomotor behavior. She found significant stimulating effects of caffeine on different parameters of the locomotor pattern and also was able to mimic the effects of caffeine with the use of an A2a adenosine receptor antagonist thereby identifying the mechanism through which caffeine is exerting its effects. She presented this work at the 41st annual Society for Neuroscience Annual Meeting in Washington (DC), at the Puerto Rico Neuroscience Meeting in San Juan (PR) and at the Annual Scientific Research Forum at the University of Puerto Rico, School of Medicine. Nikol completed her Bachelor’s degree in Psychology from the University of Puerto Rico (Cayey Campus) in 2012 and has begun graduate studies in the Clinical Psychology doctoral (Ph.D.) program at the University of Puerto Rico, Rio Piedras campus. 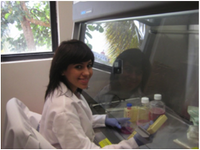 Raziel Rojas conducted studies on the effects of temperature on electrophysiological parameters of the fast transient potassium current. In this research, she used channels cloned from the sea slug, Aplysia. Her results showed that temperature is more selective than would have predicted in affecting some functional parameters, while leaving others unaffected. Her data will be combined with recordings performed in situ in Aplysia neurons from California and from Puerto Rico, to further our understanding of thermal effects on neural function. Raziel graduated from_Inter-American University in Arecibo in 2010. She then took a position as a tech at the Center for Disease Control laboratories in San Juan, working within the dengue section. In 2012, Raziel was admitted to the interdepartmental Immunology program at the University of Massachusetts Medical School. She began her graduate studies in August, 2012.

Dariana performed experiments to determine the effect of anabolic androgenic steroids (AAS) in emotional memory of female pubertal rats. She found a tendency for AAS to interfere with emotional memory when the animals were tested with the Inhibitory Avoidance Task (IAT). In addition to learning animal handling and behavioral tests such as elevated plus maze (EPM) and IAT, Dariana learned how to monitor the rat through the estrous cycle, an important protocol when studying female behavior, The acute effect of AAS in the IAT is being compared with data on chronic AAS exposure previously reported by her lab. Dariana presented her results at three conferences:

Abstracts of the Annual Conference of the Federation of Associations of Societies of Experimental Biology. Washington DC. April 2011.

Yanira learned basic lab methods, including how to prepare solutions, make plant extracts, and surgical techniques. Her training also includes behavioral tests (Elevated Plus Maze and Cat Odor Test) that are routinely used in the laboratory to assess information levels anxiety. Her project was designed to determine if the plant extract from the Hibiscus rosa sinensis reduces anxiety. In March, 2010, Yanira attended the annual conference of the Federation of American Societies for Experimental Biology in Washington DC where she presented a poster on her research: