Rosa’s research focused on identifying the developmental expression of certain Cell Adhesion Molecules using Drosophila as a model organism. She mastered immunocytochemical techniques and perfected sample handling and proper mounting of embryonic tissues to facilitate visualization of specific neurons. She was one of 100 students selected for the Howard Hughes Medical Institute EXROP program and spent the summer of 2011 in Dr. Chris Doe’s research laboratory at the University of Oregon as an EXROP recipient.  In 2012 Rosa was interviewed at Duke, Brown, MIT, the University of Oregon, University of California-San Diego and Johns Hopkins. She elected to begin graduate studies in August 2012 at Brown in the Department of Molecular Biology, Cell Biology and Biochemistry.

While participating in the URM program, Rosa’s work was presented at the following conferences: 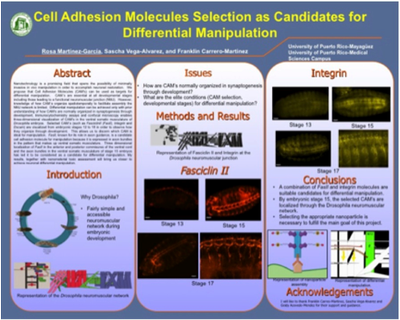 “Characterization of subcellular compartments and their link to neuromuscular plasticity in vivo”. University of Puerto Rico, Mayagüez Undergraduate Research Symposium 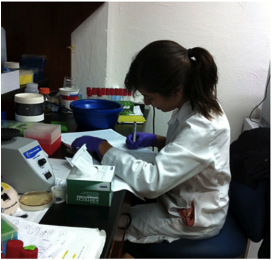 Lorraine’s research explored whether rearing temperature could affect the extent of RNA editing in a Drosophila K+ channel. The experiment's design involved rearing flies at either 14°C or 30°C, then extracting RNA from the head, amplifying the shaker K+ channel, and then directly sequencing the amplicons to quantify the extent of editing at previously published sites. Her initial studies indicated that the extent of editing did indeed change with temperature at a subset of editing sites. Next, Lorraine moved flies that had been raised at 14°C for weeks acutely to 30° and monitored the kinetics of the changes in editing. She also did the reciprocal experiment. At 30°C, the kinetics were fast, reaching a new steady-state value in about 4-5 hours. At 14°C, however, they were considerably slower, requiring almost 24 hours to reach steady-state. These results are relevant to rapid acclimation of the nervous system to a changing environment. 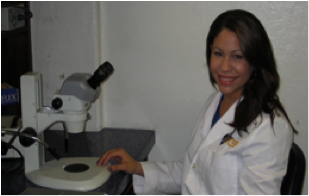 Regulation of Synaptic Growth by Cortactin

Carolina participated in a research program that explores molecular aspects of synaptic homeostasis; i.e. how neurons are able to maintain stable signaling in the face of constantly changing pre- and postsynaptic conditions.  She learned techniques related to Drosophila genetics, immunohistochemistry and confocal microscopy.

Carolina presented a poster at the Society for Neuroscience meeting in November 2011 in Washington DC and in the Annual Research Forum of the UPR Medical Sciences Campus in March 2012. Her poster entitled “Cortactin Regulates Synaptic Growth” was very well received at both conferences. She interacted with a lot of scientists and was encouraged to look at the role of cortactin in synaptic plasticity. This work has progressed very well and will be included in an article from her mentor’s laboratory.

In September 2012, Carolina entered a one-year Master’s program in Barcelona before returning to the UPR Medical Sciences Campus to enter a MD-PhD program offered by the Department of Anatomy and Neurobiology.