Bobby is working won a pilot study to develop a therapy for enabling spinal cord-injured monkeys to walk again on a surgically paralyzed hind limb. He was able to observe a surgery to implant electrodes for recording the electrical activity of muscles (EMG) during locomotion and to electrically stimulate the spinal cord, and a second surgery to lesion (hemisection) the spinal cord between the 8th and 9th thoracic spinal levels. He has played a major role in collecting 3D kinematic (motion) and EMG data both before and after the spinal cord lesion. This has included operating not only the treadmill and training the monkey with food reward to walk on the treadmill, but also using the computer programs and equipment for calibrating, recording, and analyzing the data for motion and EMG analysis. Moreover, he has learned to use, and has been making measurements with, the programs for detailed analysis of the collected video and EMG records. Bobby has been a co-presenter of two seminars describing the pilot study's progress to date.

During the summer of 2012, Bobby worked in the laboratory of Dr. V. Reggie Edgerton, Professor of Integrative Biology & Physiology, and of Neurobiology, at UCLA. Dr. Edgerton provided Bobby with hands-on and observational experience in the broader area of spinal cord injury and recovery research that is currently being conducted with animal models and human patients in his laboratory.

In 2013, Bobby spent a month in Lewisville, TX working in the peptide synthesis lab of Biosynthesis Inc. He then joined the Max Planck Institute for Developmental Biology in Tübingen, Germany. His PI is Dr. Birte Höcker (see: http://www.eb.tuebingen.mpg.de/research/research-groups/birte-hoecker.html). In Tübingen, Bobby is taking courses from both the PhD and MSc program in Advanced Biochemistry and Bioinformatics. He will be applying to several Masters program in Germany and PhD programs in the US. 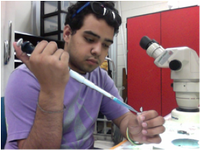 During this past year (June 2011-June 2012), Emmanuel J. Rivera Rodriguez worked on two main projects and learned a wide variety of techniques ranging from classical Drosophila genetics, fly brain dissections and confocal microscopy to beekeeping, circadian behavior and survival analysis in Honey bees, flies and ants. The theme of the first project is the development of a method to subdivide the circadian network and functionally characterize subsets of this network at the cellular, molecular and behavioral level. Emmanuel’s job in this project was to generate a recombinant fly containing three transgenes (tim-gal4, FRT-tub-gal80-FRT; UAS-mCD8-GFP) and to set up the imaging section (sample preparation and confocal microscopy). He achieved these two tasks in parallel and presented the imaging part at the URM-Family Night Meeting and at the “Primer Congreso Estudiantil Subgraduado y Graduado de Investigación de la UPR-RP” celebrated on April 25, 2012 (see attached Poster). The recombinant fly that he generated was crossed with an eyeless-flippase line and defined a subset of circadian cells within the visual processing system that is currently being functionally dissected for its role on sleep homeostasis. This work will be included in a manuscript about the role of the neuronal homeostasis gene pumilio on sleep homeostasis.

Emmanuel’s second project examines the relationship between circadian rhythms and light signaling with the immune system and lifespan. This project is based on a novel finding by a Ph.D student in the lab, Manuel Giannoni, in which honey bee foragers exposed to constant light conditions die within 3-5 days. This is in great contrast with light-dark or dark-dark conditions. Emmanuel’s experiments are testing the hypothesis that constant light conditions disrupt the circadian rhythms of the immune system and suppress its function. Emmanuel has designed a series of elegant experiments to test this hypothesis and has decided to focus on this project for the remainder of his URM training. 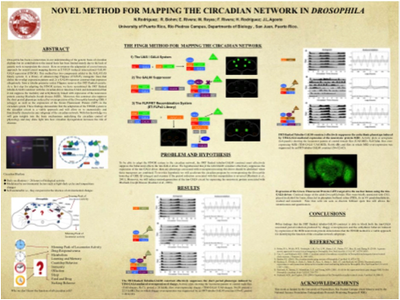 NOVEL METHOD FOR MAPPING THE CIRCADIAN NETWORK IN DROSOPHILA 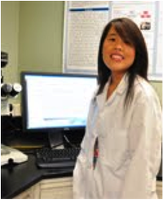 June works on nicotinic acetylcholine receptors (nAChRs), integral membrane proteins that play a fundamental role in the chemical synaptic transmission throughout the entire nervous system. Random mutations of these proteins can cause a neurodegenerative disease called Slow Channel Congenital Myasthenic Syndrome (SCCMS), a disease is characterized by weakness, fatigue and defective neuromuscular transmission. The specific mutation under study is the αC418W, which is the first lipid-exposed mutation that has been shown to produce a Congenital Myasthenic Syndrome (CMS) in a patient. Previous data had shown that αC418W presents a caveolin-1 binding motif that arrests the nAChR in lipid rafts. June’s work tests the hypothesis that the down-regulation of caveolin-1 expression in the neuromuscular junction will impair the neuromuscular transmission in αC418W mouse. To evaluate these effects, she first proceeded with the immunohistochemical studies, which enabled her to identify caveolin-1 and to confirm this interaction via the co-labeling of caveolin-1 and the nAChR. Ultimately, the goal of this research is to dissect the role of caveolin-1 and its interaction with the nAChR in vivo, providing us with a more complete understanding of how lipid-protein interactions play a role on muscle physiology. 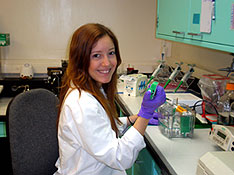 She attended the following workshops and seminars at the annual meeting of the Federation of American Societies for Experimental Biology (FASEB):

- Symposium: Will MD-PhD make me twice as successful?

- Symposium: Connecting with different audiences: the anatomy of communication.

- Talking about yourself: Interviewing well

- Poster Presentation: Estradiol and metabotropic glutamate receptors interaction within the anxiety neural circuitry at the behavioral and protein levels. (The FASEB Journal. 2012;26:918.7) 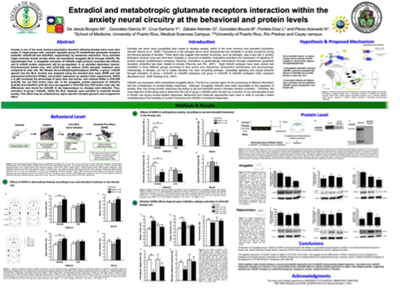 Anxiety is the most common psychiatric disorders affecting females twice more than males. In hippocampal cells, estradiol regulates group I/II metabotropic glutamate receptors (mGluR1a/5 and mGluR2/3, respectively) activation. Thus, estradiol might modulate female anxiety within the basolateral amygdala (BLA) through mGluRs. We hypothesized that: 1) BLA activation of mGluRs might produce anxiolytic-like effects; and 2) mGluR protein expression will be up-regulated, in an estradiol dependent manner. Ovariectomized female rats, with (OVX+EB) and without (OVX) estradiol treatment were compared to male rats. We infused (S)-3,5-dihydroxyphenylglycin (DHPG), a group I mGluR agonist into the BLA. Anxiety was analyzed with the elevated plus maze and risk assessment behaviors (RABs); and protein expression by western blots analysis. DHPG (1.0 μM) increased the time and entries in open arms; and reduced RABs in OVX+EB (p<0.05), but not OVX and/or male rats. In the amygdala, protein expression of mGluR1a and mGluR2/3 were up-regulated in OVX+EB (p<0.05) than OVX and/or male rats. No differences were found for mGluR5. Thus, activation of group I mGluRs, within the BLA, depends upon estradiol to modulate female anxiety. This effect might be underlined by region-specific estradiol genomic and nongenomic effects.