Neuronal Control of Behavior in an Intermediate Host for Intestinal Schistosomiasis 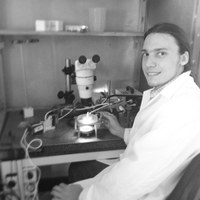 dress transmission of the parasitic disease schistosomiasis (also referred to as bilharzia or ‘snail fever’). This chronic and debilitating disease is estimated to impact the lives of up to ten percent of the people on Earth. One obligatory factor that is shared by all schistosome blood flukes is the presence of specific snail species that serve as intermediate hosts, supporting critical stages of their multiplication and transformation into forms that are capable of infecting humans. The class of schistosomiasis that occurs in the Western Hemisphere is caused by Schistosoma mansoni, which requires the planorbid pond snail Biomphalaria glabrata to serve as its primary intermediate host. As human infections would cease if parasite infections in snails were prevented, Lee’s investigation explores the Biomphalaria nervous system for potential interventions in this host-parasite system. His research focuses on the identification of serotonergic neurons that may respond to infection and peptidergic neurons that control reproduction. 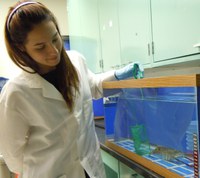 a 3rd year Biology student from UPR Cayey Campus. She is working on one of the subprojects of the Institute of Neurobiology´s Puerto Rico Center for Environmental Neuroscience (PRCEN), titled River ecosystems: Impact of Anthropogenic Changes in Puerto Rico's Urban Rivers on Behavior and Underlying Neural Circuitry of Fish and Crustacean Species. Laura´s work focuses on studying the effects of heavy metals, such as copper (Cu) and lead (Pb), and changes in water temperature, oxygen levels and pH on interactive and agonistic behaviors between pairs of freshwater prawns (Macrobrachium). Laura performs behavior recording sessions during periods of 30 minutes each before, during and after exposure to concentrations of metals or water conditions similar to those found in urban rivers of the north coast of Puerto Rico. She then quantifies locomotion, dominant and submissive behaviors, and fast-escape responses, using ethograms and behavior tracking software. Laura also collaborates in other aspects of the project that involve expeditions to various rivers to collect local species of Macrobrachium for use in the labs experiments, and to collect water and sediment samples to determine levels of metal and organic contaminants at various points.

Behavioral and Synaptic Plasticity of Excessive Alcohol Use During Adolescence 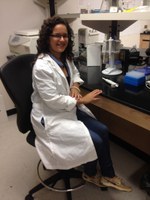 Using high-alcohol preferring C57Bl/6J (B6) mice, a major goal in our laboratory has been to develop alcohol-drinking models that reflect the transition from controlled use to excessive drinking (i.e., ethanol escalation). This transition is characteristic of the addiction process and the development of ethanol dependence. Cheryl Vasquez's studies addresses the behavioral and neurochemical factors that induce ethanol escalation during the adolescent period, which is marked by heightened synaptic glutamate plasticity. So far, our studies indicate a strong association between excessive adolescent drinking and heightened glutamatergic activity in the prefrontal cortex and nucleus accumbens. Research to this end should provide new glutamate- and neuroplasticity-based pharmacological strategies for preventing excessive adolescent drinking, which often leads to lifetime alcohol use disorders. 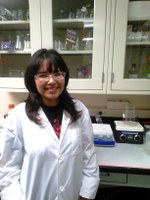 Addiction is a mental illness characterized by a compulsive behavior with adverse effects on the physical, social and economic condition of the individual. Our laboratory examines the pathophysiology of the development of addiction to substances, particularly cocaine. Changes at cellular and molecular levels are observed during the development of addiction. Importantly, changes in neuronal connections are observed in the brain areas that comprise the reward-mediating mesolimbic dopamine system. Electrophysiological changes in this system are of particular interest. The Ih current in dopaminergic cells of the Ventral Tegmental Area and Nucleus Accumbens, part of the mesolimbic system, has been found to diminish during the addictive process. Using molecular biology tools and rats as an animal model, Aynette will be studying the Ih current channel, the Hyperpolarization-activated cyclic nucleotide-gated (HCN) channels, and how its distribution and expression is affected by the addictive process.